My hubby was doing some traveling for work over the last 2 weeks…so of course that  meant it was time to take on a new project! This time, I decided to finally convert the space under our basement stairs into a playhouse for Liam and Emily.

It’s something I’ve wanted to do for awhile now, and thanks to inspiration from Pinterest, my friend Janny, HGTV, and the wonders of Google and YouTube, I finally made it happen!! I think it’s genetic, taking on projects around the house with an independent spirit.  I remember a story of my dad falling asleep on the couch one afternoon and when he woke up, my mom had wallpapered the entire room around him…so there ya go, it clearly runs in the family 🙂

I started by taping out a rough idea of how I hoped the design would come together.  I tore down the existing drywall and put up some new framing for a  window and door, then put up some new drywall.

Let’s just say, I won’t be offering my drywall services professionally anytime soon. But all in all, it’s “good enough” for our little playhouse. I would definitely try it again…practice makes perfect.

I covered the outside walls with inexpensive cedar shingles and stained them a dark brown.  I let Liam pick the colour…and man did I try hard to convince him that we should make it blue, but he was dead set on brown, saying “mom, it’s my FAVOURITE colour!”, which was news to me. The door was actually a 24″ standard door that my dad helped me cut down to about 54″ high.  I cut out a spot for the window and a mail slot, and added some trim.  My dad helped me put up an exterior light and worked on the electrical stuff. Inside, I painted the walls white and put down some vinyl wood flooring.

And here’s how my little project turned out! We’ve got some decorating to do inside (and a door knob and door bell for the outside)!  So far, it’s got our play kitchen, a toy workbench and all of our dress up costumes. It’s not perfect, but it’s still pretty awesome and the kids are having a lot of fun with it.

I can’t wait to put Christmas lights on it 🙂 Thanks so much for stopping by today!

(the word art on the photos posted here are digital stamps by Ali Edwards, available here and here 🙂 )

Over the weekend, my mom and I headed down to Pennsylvania to visit my brother and sister-in-law, who are expecting their first baby mid-December.  To say I am excited about meeting this little guy would be an understatement. (I may have teared up a bit just thinking about him twice over the weekend!).  We attended the baby shower Sunday and it was really REALLY beautiful! The theme was “a little pumpkin is on his way”. Jessica’s mom totally outdid herself with the PERFECT décor…

Favor tags by me!

In honor of this little man’s upcoming arrival, I made onesies to celebrate each month of his first year!

I’ve seen the monthly onesie idea on Pinterest before and loved it, but I wanted to customize it a bit more for Parker (and Phil & Jess!). My brother just completed his degree in athletic training; sports are clearly going to be a big part of this family’s life. I found a font that reminded me of a vintage(ish?) sports jersey and varsity style numbers for the months 1-12. I printed them off onto iron-on transfers from Staples and used my Silhouette Cameo to cut them out, then ironed on following the transfer instructions.

Love the way they turned out (and I wish I had taken a picture of them all together!!! ah well, next time).

I was so flattered to be asked by Jess and Phil to take a few photos for them after the shower! These are some of my favourites 🙂

It does not surprise me one bit that he’s already got his own hockey jersey 🙂 And see those awesome baseball doorknobs on the closet? My brother made them!!! I guess craftiness runs in the family!

And for these two! Love them 🙂

We had Chinese food for dinner Monday night from our favourite Chinese food restaurant (South Seas. This place is so special to us for A LOT of reasons, which I’ll have to share another day). My fortune cookie said something along the lines of…

“There will be a lot of happiness surrounding the events of this week”.

This is seriously one of the most exciting things that has ever happened to me!! I am so incredibly happy to announce that I’m joining the Ali Edwards Digital Creative Team!! And joining me on this awesome team are some really, REALLY creative, talented and inspiring scrapbookers, memory keepers and story tellers. You can meet them all right here. That means there’s going to be a whole lot more scrappy goodness here on my blog for the next year, featuring some really amazing digital products designed by Ali Edwards.  I’m hoping to put together some more video tutorials so you can join me in telling your stories too 🙂

Thanks so much for stopping by today and sharing in my excitement! I can’t wait to get started 🙂

In June, we got to attend Liam’s Preschool “graduation” (there were actually 2 of them, this was the second one).  It. was. awesome! Seriously! They did a big musical performance with props and routines for all their songs…my favourite was “Let It Go”, from Frozen. And it became very clear that this boy is not really into the whole “performing in front of an audience”, in the traditional sense. We watched as he inched forward ever so slowly from the front row until he was far enough from the group to run to us during the middle of the performance. I laughed so hard, I had tears in my eyes! We had to bribe him with the promise of cake if he went back to finish singing with his classmates. He was silly, and goofy, and perfectly happy just being himself.

A few days later, a friend from highschool shared a link to a video of Jim Carrey making a commencement speech on Facebook.

And man was it good!!! Like, profoundly good.  It made me wonder, if I had heard those words earlier in my life, would I have chosen this same path? Who knows! But this message is definitely one that I want to share with my kids when they’re making decisions about their own paths one day.

And that is how this scrapbook layout was born…

This layout was actually in the works for a veeeerrry long time.  I just couldn’t settle on a way to design/embellish it. Then Ali Edwards released the “Be Brave” digital stamps, and everything clicked! I used a digital template from Studio Calico’s Pen and Paper class, which really helped keep the focus on the words while featuring a favourite photo. I kept the embellishments super simple with a few pieces of wood veneer from Studio Calico (here), acrylic stars (from this kit), and a strip of patterned paper (from this kit). I added some digital word art from Ali’s Prompt stamps to the photo and built the title with the hand written “be brave” stamp. The other fonts in the title are “Impact Label” and “Traveling Typewriter” (and they’re free from dafont.com).

The journaling is pretty much directly from Jim Carrey’s speech… because they are perfect. And there’s a little note from me to Liam at the beginning.

I love that last line too….”…don’t ever let fear turn you against your playful heart.”

Thanks so much for stopping by today!

I decided to try something new today! I made a video to show my process for making a hybrid scrapbook page and how I used Ali Edwards’ digital “Prompt” stamps to make the title for this layout.

Love This by Pam Baldwin 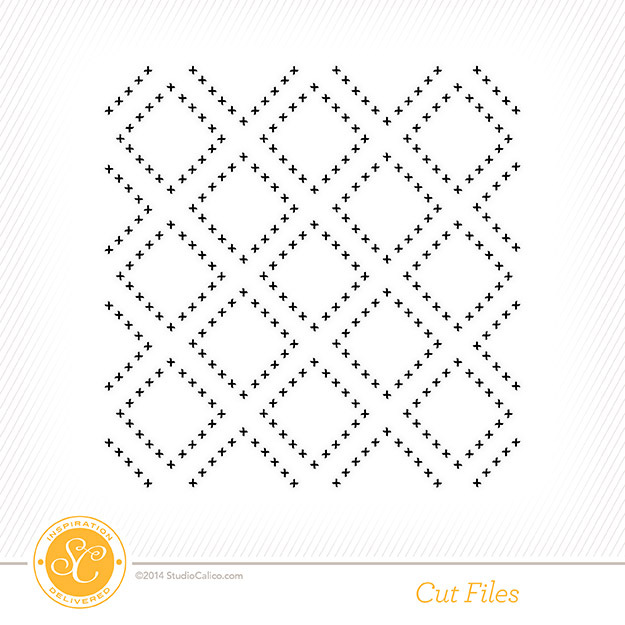 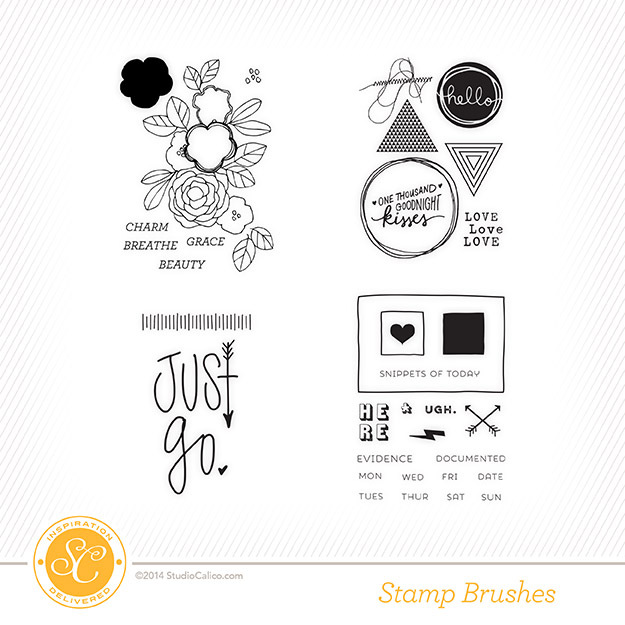 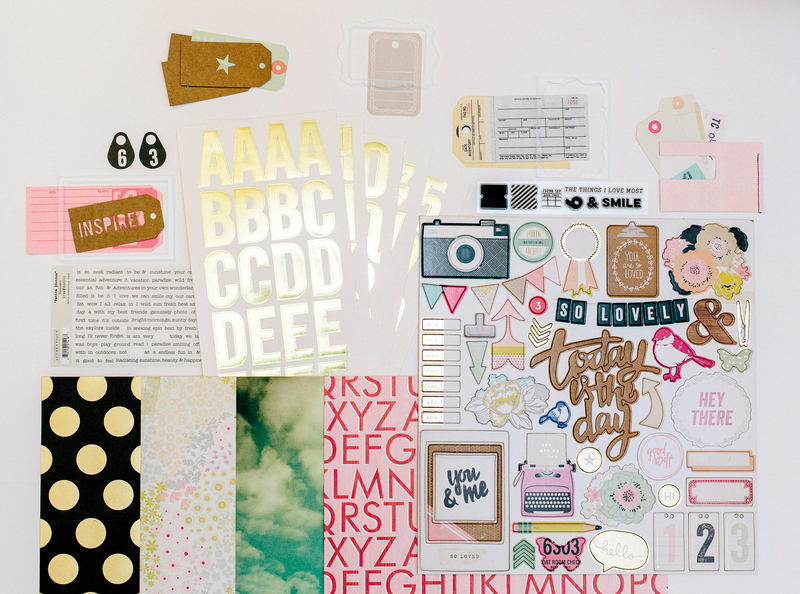 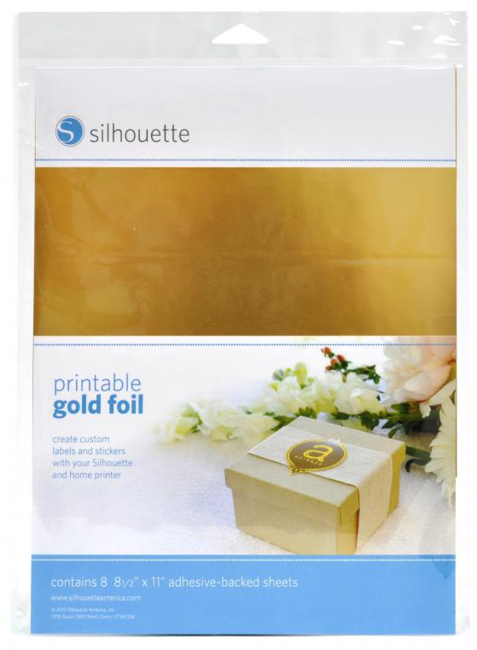 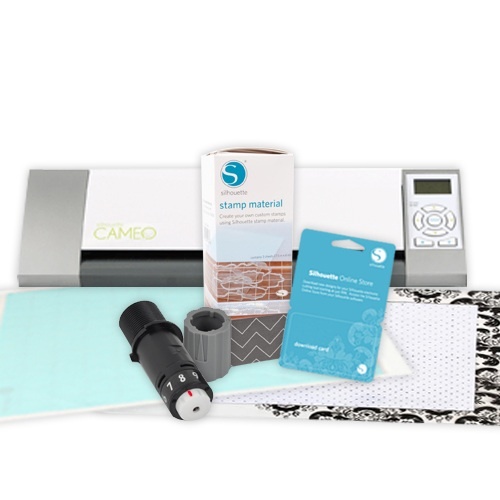 Please feel free to post your questions in the comments and thanks so much for stopping by!